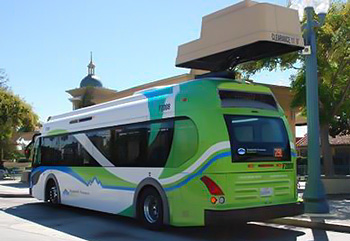 Foothill Transit has fully electrified one route in its service area and is investigating the feasibility of electrifying other routes as well. The electric buses under study—Proterra EcoRide BE35 transit buses with eight 368V lithium-titanate battery packs offering 88kWh of energy—can be completely charged in less than 10 minutes via two 500kW fast chargers located mid-way along the route.

The on-road portion of the evaluation focuses on collecting and analyzing vehicle performance data from the electric buses and the conventional buses. Based on the field data, NREL will develop a validated vehicle model using the Future Automotive Systems Technology Simulator, or FASTSim, to study the impact of route selection and other vehicle parameters. NREL will also analyze the infrastructure requirements and grid-side impacts of the high-power charging stations. In addition, NREL will conduct chassis dynamometer testing of the vehicles to determine the fuel economy and emissions impact of the electric bus technology in a controlled setting.

Initial results indicate that the electric buses offer significant fuel and emissions savings compared to similar conventional vehicles. The final results will help Foothill Transit determine other possible routes suitable for electrification and provide unbiased technical information to other parties interested in adding such vehicles to their fleets.

Click here for a pdf of the full report