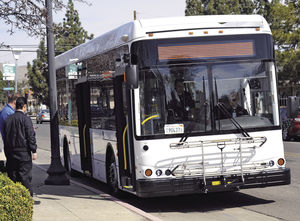 The first two of 10 zero emission, battery electric GreenPower buses have officially arrived in the city and, after a few minor touch-ups, will be up and running for residents to use.

“It is exciting,” said Richard Tree, of the arrival of the first two GreenPower buses. “It is almost like the city has won the lottery.”

Tree, who serves as the manager of the city’s transit center, said city residents will be able to start riding on the 40-foot buses sometime at the beginning of April of this year. He said the next eight busses will arrive in the city in three separate shipments between now and June.

“They are coming quick,” Tree said.

With the current two buses, Tree said before they can be utilized by the public they first need to have a farebox installed, minor changes done to some of the cameras, and allow time for bus drivers to get familiar with them.

In June of 2017, the city received nearly $9.5 million in funding from the California Air Resources Board to pay for Porterville to become the first all-electric city transit system in the nation. GreenPower Motor Co. was awarded the contract to build those buses.